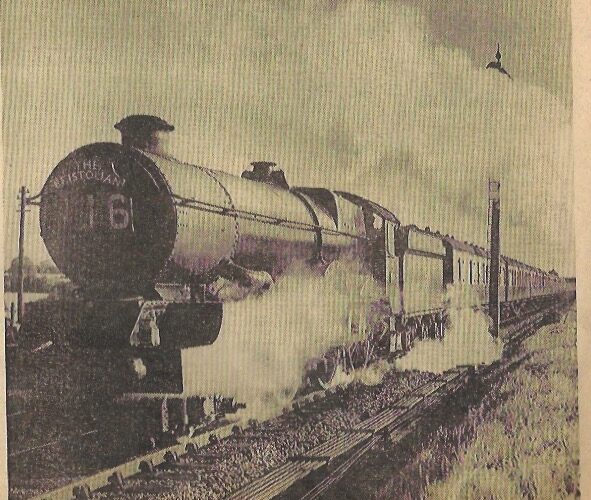 A glimpse of the Age of Steam through the pages of an old newspaper.

Found in a dusty bag at Glenside Museum, a Bristol Evening Post souvenir to celebrate the 150th anniversary of the original Great Western Railway, in 1985.

With appropriate deference to train-spotter and journalist David Harrison who compiled the fascinating special edition, here are some steam train stories that deserve a fresh airing.

It was on 30 July 1833 that Bristol businessmen met in the city’s Guildhall to try and raise the almost £3 million (at least £155 million at today’s prices) that Isambard Kingdom Brunel reckoned it would cost to build a railway to London.

Getting plans approved by Parliament was also costly. A first Great Western Bill only just scraped through the Commons after 57 days of parliamentary time. But it was then scuppered by vested interests in the Lords. Both the owners of companies running horse drawn coaches and those who owned the canals predicted their financial ruin; sheep farmers were afraid the smoke would spoil their wool; and game keepers worried for their stock.

Extraordinary as it might seem Eton College, some distance from the route, also objected, on the grounds that it would “excite revolutionary ideas in the minds of schoolboys”.

A second Bill passed in 1835, and work started in earnest. The line from Bristol to London was completed in 1941. The following year the young Queen Victoria became the most British monarch to travel by train.

Riding in a luxuriously equipped carriage she was transported the 18 miles from Slough to Paddington on the new line behind the disturbingly named Phlegethon (‘River of fire’) engine, with Brunel on its footplate. Anxious about the speed of the locomotive she ordered that in future royal trains should go no faster than 30 miles an hour.

The final link on the line involved the construction of the Box Tunnel. It would cost 100 men their lives. Up to 4,000 of them were winched down shafts to work 16 hours a day using crude tools and gunpowder to blast their way through. They toiled to the light of a tonne of tallow candles every week.

Some 300 horses were used to haul away the rocks, clay and sand they excavated. Begun in the winter of 1838 it would take almost three years to burrow though almost two miles to create what was at the time the longest rail tunnel in the world.

The one enduring, and costly, error with the GWR was Brunel’s insistence it should be a broad gauge line while the rest of the country’s trains ran on a narrower gauge. It was not until 1893 that the GWR was made completely compatible with the burgeoning railway system.

The company’s management expected total staff compliance with their rules, at the risk of instant dismissal. Driver error or train crashes, and there were plenty, could result in imprisonment.

Demands to reduce working hours from 12 a day to 10, or to be paid for compulsory overtime, were met with intransigence. It is small wonder railwaymen formed the union that became ASLEF.

‘The GWR’s attempts to foster the company spirit makes today’s Japanese companies look amatuerish by comparison,’ recalled the union’s journal, noting the steadfast loyalty of hard-done-by workers whether through fear or respect.

In truth the GWR was a service for the business elites who traveled first class. For others, in its early days, there was nothing romantic about train travel.

Open-topped second class carriages were sat immediately behind the engine. Passengers were locked in with no heating, little lighting, and no toilets, and were showered by sparks, cinders and smut – particles of soot.

In bad weather conditions could be appalling, with sometimes fatal consequences. In January 1845 one hapless man was frozen stiff when he was lifted out at Bath, and left to die on the platform.

According to GWR rules ‘No member of staff may give assistance to third class passengers’. They fared even worse being only allowed to travel after dark, on goods trains. One man froze to death within 45 minutes of leaving Temple Meads.

Accidents were frequent in the early days of rail travel and fatalities among railway workers were high. It was not until the Regulation of Railways Act in 1871 that an inspectorate began properly to investigate safety issues.

Meanwhile the names of the locomotives that serviced the south west added a dash of romance of the railways – The Flying Dutchman, The Zulu, The Cornish Riviera, and The Cheltenham Spa Express or Flyer.

Between the two world wars The Bristolian became the fastest on the line, averaging 88 mph on its 105 minute journey to London. The 4:30pm service was known as the Honeymoon Train as it whisked happy couples off after their wedding breakfasts.

Those working on the railway dreampt up less salubrious nicknames for other trains – there was The Flying Pig, The Mopper Up and The Bacca.

Life on the branch lines that gradually sprung up in the west was more idyllic. The Weston, Clevedon and Portshead Railway seems to have been a relaxed affair with tales of drivers halting to pick mushrooms to fry on their shovels. Apparently one guard would leap off to down a quick pint with the crossing keeper at Kenn Road in Clevedon, while another whole crew stopped off at Clapton-on-Gordano to celebrate at a wedding party.

All of which makes sense of the warning printed on Victorian rail tickets: ‘This ticket is given subject to there being room on arrival of the train, the precise hour of which will not be guaranteed.’

Perhaps little has changed since the Age of Steam, after all.